Alice Rivières is French. She is kind, well-spoken and optimistic. And she has a family history with Huntington’s disease (HD). Hear her strong testimony.

Alices’ mother got sick 20 years ago. Ten years later she decided to get tested. It felt like a part of her just needed to know: needed to be certain to be able to get on in her life. And she was “sure not to have it, so…”

Unfortunately Alices’ test results came back positive – which in case of HD is the answer you don’t want. She had the disease.

Alice has known for ten years. In four of them she felt powerless. After a while she understood that she had to reconcile with the disease.

“I had to learn how to live with it and not against it”.

Slowly, it was no longer an alien inside of her, but rather a part of her.

Through different art forms such as dancing, Ding Ding Dong explores the many sides of the disease: “To us HD is not something ugly, it is something very special and interesting,” she says.

Ding Ding Dong want to encourage people with HD to speak about the disease and show the world that also “sick people” have something to say.

Alices’ philosophy is that the society has something to learn from people with HD, from people that are a bit different.

After all, we are all different in one way or another.

Check out Our Voice – here you can find personal and professional stories about the disease. 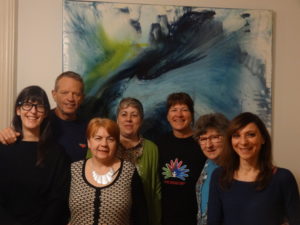 June 12, the European Huntington Association board will meet in Portugal. The Meeting will take place around the same time as Portugal’s official “Huntington Day” June 15.  The board from left to right: Filipa Jùlio…
Read more
View Calendar