During the Audience with Pope Francis the 18th of May, the European Huntington Association met Yulia Tsvetkova in Rome. We talked about Huntington’s disease (HD), the event and the situation in Russia today. Watch the video interview below!

Yulia Tsvetkova is from Russia. She currently lives in Moscow, but the day EHA met her she found herself in Rome. She travelled together with her mother to attend the huge Huntington’s disease event made possible by HDdennomore (“Hidden no more”). When we met her it was only minutes ago since she and her mom had met Pope Francis face to face.

“This was an event that couldn’t be missed,” Yulia eagerly stated. Her mother had previously sung in the quire in her local church and she glowed up when she heard beautiful music again. But the best part was to meet the Pope, to shake his hand and give him a hug.

Huntington’s disease impacted from all over the world had come together in the Vatican to participate at the event. Yulia stated that no matter nationality, religion and language: faith doesn’t see any borders. An event like the one in the Vatican gave the Russian woman hope: “Faith united us today”.

The aim of the event was to tell the world that Huntington’s disease should be hidden no more. And Yulia is constantly working on that message. Her grandmother got sick and no one talked about it. No one knew what it was, and no one could support the family. It was a disease wrapped up in taboo.

When the family learned that Yulia’s mother had inherited the disease, the situation had fortunately improved. At the Research Center of Neurology in Moscow they got information and help. Lately a Russian HD community has taken shape – thanks to Irishka Horoshilova and others.

Yulia has a positive outlook on the future; more people has got to know about the disease in Russia and the stigma surrounding it is about to fall apart. She hopes that the HD community of the world can meet again in 10 years – only this time it is not to meet the Pope; in 10 years it is to get introduced to a new drug. “The science is on our side,” she states with a glow in her eyes. 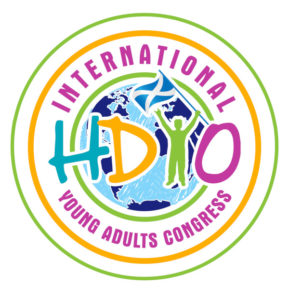