From 13thto 16thof September, to important meetings took place in Vienna: the EHA Business Meeting and the EHDN Plenary Meeting. During the weekend EHA’s board was re-elected and over 1000 participants got updated on the latest Huntington research.

The European Huntington Association’s Business Meeting took place at the Austria Center Vienna. Around 70 people participated. Among them were many new faces.

All of the three associations were accepted as new members of the European Huntington Association.

At the end of the meeting, Dr. Alzbeta Mühlbäck gave a rapport on Ask the Doctor. She could announce to the crowd that over the last couple of years, the service has received questions from 22 countries.

The following day, the European Huntington’s Disease Network Plenary Meeting took place at the same Center. Here, over 1000 people from all over the world participated.

Even though research was on the agenda, the meeting started with a personal touch.

Astri Arnesen, President of EHA, talked about her own experience with Huntington’s Disease: to grow up with a sick mother, having children, hear about the discovery of the Huntington gene in 1993 and the hope that followed.

“We know that we’re on the right path, but we don’t know what’s around the corner, or how far it is to the next breakthrough,” Arnesen said to the 1000 people in the crowd.

“But we will continue until we reach the finish line and until we have efficient treatment available for all”.

During the following days, around 70 presentations, teaching courses and workshops took place in the Austrian capital.

There were especially high expectations of the last day of the conference. Sunday was the “Huntingtin lowering day”, with the pharmaceutical companies Wave, Roche and Ionis, presenting their trail results.

As previously announced, Wave is in the middle of testing their “Precision medicine” (which only targets the ‘sick’ Huntingtin protein and leaves the healthy protein alone).

To get more information about the latest research we recommend you to go to www.HDBuzz.net and www.EHDN.org

There were an optimistic atmosphere at the meeting. Participants from all over the world had come to learn more about Huntington’s – and to be a part of the Huntington community.

Among them were family members from Kenya, Egypt, Oman, Brazil and India – all enthusiastic to establish associations in their countries.

“I feel as part of a family, I feel that I belong to this place already even though I’m such a newcomer,” Nayana Shah from India said before finishing off with a wish:

“I want to provide a support system in my country”.

The European Huntington Association have already planned next years conference. This will take place 4thto 6thof October in Bucharest, Romania.

We hope to see you there! 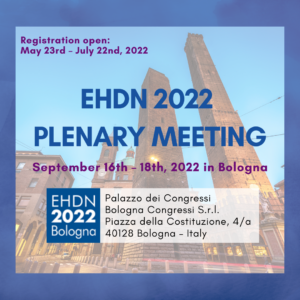