This year in February the 14th Huntington’s Disease Therapeutics Conference took place in Palm Springs, USA. This is one of the largest annual meetings for professionals and researchers working on Huntington’s Disease. The conference was bigger and more exciting than ever before.

We heard exciting presentations about the changes in the brain structure, in the white matter and about the connections between the cortex and the  deeper part of the brain, including striatum in Huntington’s disease from Richard Lu, Peter McColgan and Govinda Poudel and Dorian Pustina.

Even more  exciting were the presentations on the “Huntingtin lowering” – therapies that focused on the reduction of the huntingtin protein and its mRNA. The slide shows how many different approaches to huntingtin lowering are currently being explored.

Paulina Konstantinova of uniQure had a great talk. UniQure’s approach is based on a tiny, harmless virus called Adeno-Associated Virus (AAV), which contains instructions for switching off a huntingtin gene that subsequently lowers huntingtin levels. The official name for the uniQure product is “AMT-130”.

Dinah Sah of Voyager Therapeutics also reported on the therapeutic approach, also AAV, in the development of huntingtin-reducing drugs. As with Unicure, the viral vectors should also provide the instructions to the brain cells to lower the level of huntingtin. Voyager’s current drug is called VY-HTT01.

Davidson presented the work of her group, which has been working with huntingtin lowering for almost 20 years. Her group published one of the first proofs for the successful reduction of huntingtin in mouse brains. Recently, the group has conducted research with the CRISPR/Cas9 gene scissors and other genome processing tools.

A new approach was presented by Anu Bhattacharya of PTC Theraputics . She presented a completely different approach to huntingtin reduction: PTC targets specific genes with “small molecules” that can be taken in tablet form. Bhattacharya explained that PTC’s drug specifically identifies huntingtin messenger RNA as cell waste, causing it to degrade. In cells in the laboratory this led to a strong reduction of Huntingtin.

At the end of the first day of the conference there was a panel discussion: “How should the Huntington community prepare for possible results – positive or negative – of the Huntingtin reduction studies? This is certainly a central question that needs to be discussed further.

New approaches from preclinical research for use in human therapies:  Lauren Byrne from University College London presented her study on biomarkers by measuring mutated huntingtin in nerve washes and the protein neurofilament light (NFL) in blood and cerebrospinal fluid. NFL is a protein found in neurons and released by them when they are damaged.

Amber Southwell’s from the University of Central Florida is also working on the development of methods to quantitatively detect mutated huntingtin in cerebrospinal fluid. Southwell’s group was the first to demonstrate that mice treated with Ionis Pharma’s Huntingtin Reduction ASO showed decreased levels of huntingtin in the cerebrospinal fluid. An important milestone on the way to human application.

David Salzman of sRNAlytics and his company is investigating the benefits of RNA in disease research, with sufficient accuracy to distinguish between Huntington’s disease, Alzheimer and Parkinson’s disease. However, more research is needed to find out whether it can be used as a biomarker or for drug development.

Guoping Feng of the Massachusetts Institute of Technology and his laboratory is working on the development of new primate models for Huntington’s disease. Although he says that mice are very useful as models, they do not have all the brain regions that humans have and it is therefore necessary to conduct research with more developed brains. In the past, it was difficult or even impossible to genetically modify monkeys, for example, but new gene processing tools have made it possible.

The last day of the conference began with biology of the Huntington’s gene itself. It is important to understand the functionality of the gene and changes caused by the mutation for Huntington disease.  Rick Myers of Hudson Alpha describes that his laboratory is currently working on understanding the way the Huntington’s gene is switched on. Our genes are encoded in our DNA and remain inactive until they are activated by certain cell processes.

Gill Bates of University College London presents the work of her laboratory in understanding the “splicing” of the Huntington’s gene interspersed with long passages of DNA.

Chris Ross of Johns Hopkins University talked about “post-translational modification” – small chemical changes that influence the behaviour of proteins. Erich Wanker was invited as an expert on the behaviour of huntingtin. In the lab, he uses fruit flies to study how mutant huntingtin causes cell death. Out of 413 possible interaction partners, Wanker was able to filter out 36 that could be interesting.

At the end of the conference, there was an exciting presentation block on gene modifiers – the other genes other than the Huntington’s gene – that play an important role in Huntington’s disease. Variations of these genes have already been discovered that may cause the disease to break out sooner or later in life.

Marcy Macdonald as a pioneer in Huntington’s research explained that “nature has already carried out a successful study on Huntington’s disease”, meaning that the influence of diverse genes and their variations may be observed in real patients. One only needs to work out how these genetic effects may be copied artificially so that one may make a therapy out of it.

After analyzing the data of 4,000 patients, the GeM-HD consortium identified four different regions of the genome found in people with early or late onset of the disease

Peter Holmans of Cardiff University, also a member of the GeM-HD consortium, is currently working on understanding the influence of genetic alterations on Huntington’s disease.

Holmans focuses on the mental symptoms of Huntington’s disease – aggression, depression and behavioral disorders. His group has an interesting approach to looking for genetic variations that influence these symptoms independently of the general progression of Huntington’s disease. Analysis of the polygenic risk values for psychological symptoms such as severe depression helped Holmans to conclude that Huntington’s patients with certain genetic variations are more likely to develop such psychological symptoms.

Hilary Wilkinson of the CHDI Foundation described  the  efforts to understand the role of DNA repair genes in Huntington’s disease. The nonprofit CHDI is assisting immensely by providing funding, tools, guidance, and open-source data.

After the conference, I really feel that we are making a difference! 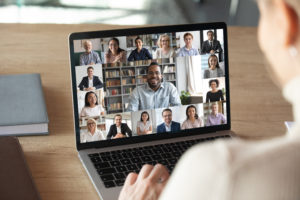