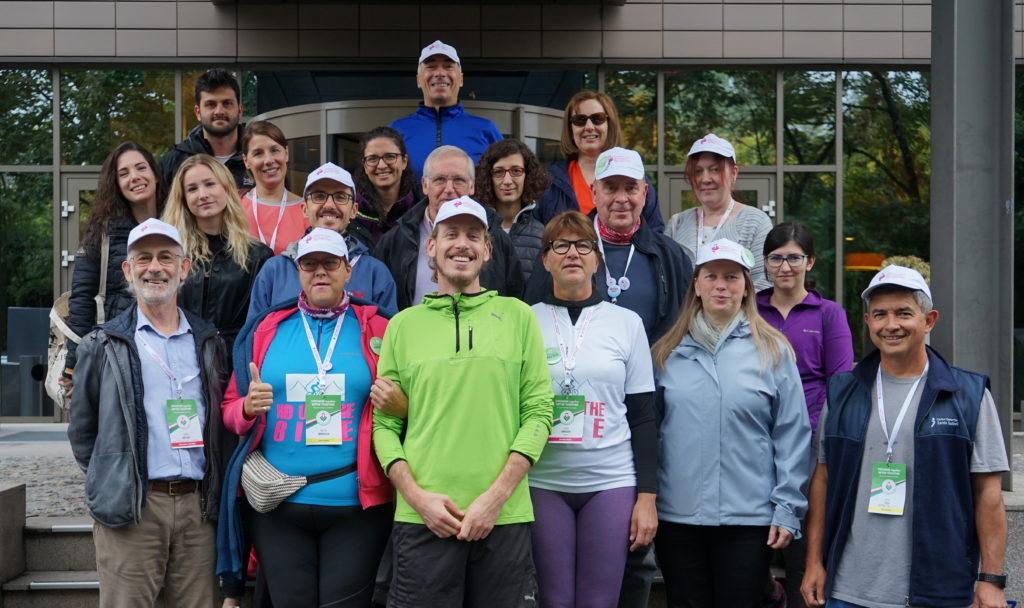 October 4-6, the European Huntington Association conference was held in Bucharest. 220 professionals and family members were gathered in Romania to meet others and to learn more about Huntington’s disease.

Over the weekend, more than 30 sessions and workshops took place at the Ramada Bucharest Convention Center. In addition, there were important meetings taking place the day before the conference officially started.

Ramona Moldovan, one of the founders of the Huntington’s Disease Association of Romania, welcomed the participants. Over the next hours they learned about Huntington’s disease and how to improve the situation for family members in Romania.

Since the Huntington’s Disease Association of Romania was founded in 2014, many steps have been taken to improve the situation in the country.

In the room next door, another meeting took place: the European Huntington Association (EHA) board was gathered to talk about the last year, the conference and the upcoming months.

Since the last meeting, a song had been written for the Huntington community.

In May, Astri Arnesen, President of EHA, met Olivia Sawano. During their meeting, Astri asked the musician to write a song for the community. Olivia came up with North Star – HD 8890:

– When I was collecting ideas for the song, I found out that “HD” was an abbreviation for a star catalogue as well as Huntington’s disease, Olivia told EHA in September.

During the board meeting, the room was filled with music as the members learned the lyrics: “North Star, one day you’ll be gone but your light travels on and on,” the board members sang.

It was not the last time the song could be heard during the conference.

The following day, the official opening of the EHA conference Stronger together – Better together took place.

Astri Arnesen and Ramona Moldovan welcomed the participants before the session Taking care of patients started.

Coping with the disease

When it comes to Huntington’s disease, an important aspect is to figure out how to create the best life possible. Since there is no available treatment, families – in collaboration with health-care professionals – have to find their own way of coping with the disease.

Here, a crucial aspect seems to be social interaction.

When Anne Lennon Bird’s husband got too sick to leave the house, she opened up their home and invited the world in. Social interaction was also an important aspect in the weekly schedule developed by Alexandra Cachia from Malta.

When her mother, Fiona, was diagnosed with Huntington’s disease, she developed a program covering diet, physical activities and social activities together with professionals.

Every morning “Tea with friends” is on Fiona Cachia’s agenda.

Talking about the disease

Another topic on the first day of the conference, was talking about Huntington’s disease. When it comes to how to talk about the disease, there is no such thing as right and wrong.

However, being open and supporting each other might be a good place to start.

Paul de Sousa opened up about how he and his wife Dina de Sousa talked about Huntington’s disease in the family. As their children started asking questions, they tried to answer them in the best way possible.

But talking about the disease is not always easy. Sometimes meeting others in the same situation is what you need.

Johan Oreel told the conference attendees about how his trip with the Huntington’s Disease Youth Organization (HDYO) totally changed his approach and helped him open up to family and friends.

While some of the sessions took place in the Terra Plenary Hall, others were organized in smaller workshops.

Mara Andrade from Portugal especially appreciated the smaller sessions: – In the smaller groups we could really share experiences and we felt more comfortable asking questions.

One of the smaller sessions Predictive testing – why test or why not, made a big impression on many of the attendees. During the session Alice Rivieres from France (founder of Dingdingdong) and Matt Ellison from the UK (founder of HDYO), shared their own experiences.

Alice talked about how she was so determined to undergo genetic testing 13 years ago.

As she reflects back on the situation today, she thinks it would have been good to meet others in the same situation as her: – I was so locked in my choice, but I think if I had met other people like me, I would have listened more.

– I was like a bull. Family and friends would tell me: “Slow down, you have time”, but I just wanted to do it.

Outside the room, Mara agrees with Alice: – I have not taken the genetic test and now I don’t feel in a rush to do it. We cannot predict our reaction to a predictive test.

– Before coming here, genetic testing was a very complex subject for me. Now I’m more relaxed about it.

– Don’t ask: “Do you have some sexual problems?”

During EHA’s last meeting in Vienna, we asked the participants to come up with topics they wanted to hear more about. One of them was sexuality.

At EHA’s conference in Bucharest, the topic was covered in two sessions: one big session held by EHA’s own doctor Alzbeta Mühlbäck followed by smaller workshops.

Do you have any questions about Huntington’s disease? Ask Alzbeta here!

In Alzbeta’s view the patient-doctor relation creates an excellent platform for discussing sexual issues. So, if you are a doctor, how should you address the topic?

– Don’t ask closed questions such as: “Do you have some sexual problems?” because then the answer tends to be “No”. Be as creative as when you talk about a headache: “Are you experiencing any headache? Do you have it every day? In the morning? What can I do to help you?”

She then gave an example of a person who was at-risk of inheriting Huntington’s disease, who could not get an orgasm. When they talked about the topic, Alzbeta discovered that the woman had a full-time job with a lot of things going through her head.

The morning was the time of the day she felt most clear and awake. However, she and her partner usually engaged in sexual activities at night. Alzbeta then suggested to try use the mornings instead.

– If you have some problems, don’t deal with them after 10 hours of work. Take your time, use the weekends.

After the session, Rob Haselberg from the Netherlands and member of HD-COPE told EHA that he really appreciated the talk: – It was really nice to sit together and openly talk about sexuality. I think it’s very important.

Svein Olaf Olsen from Norway and president of the International Huntington Association added that sexuality is much more than just the “satisfaction part”: – It’s about intimacy, giving each other a hug and a kiss.

– It’s a huge topic and we should have much more focus on it in the future.

On the last day of the conference, ongoing drug trials was on the agenda. Four pharmaceutical companies had travelled to Bucharest to talk about their research.

Roche Pharmaceuticals, Wave Life Sciences, uniQure and Novartis – all of them are currently working on developing huntingtin lowering drugs. However, they are exploring different approaches.

What is huntingtin lowering and gene silencing? Learn more at HDBuzz.

Both Roche and Wave are currently exploring the use of antisense oligonucleotides (so-called ASOs) as potential treatments. This is a type of treatment in which specially designed DNA molecules are used to adjust or “turn off” a message from the gene.

Roche is conducting a trial called GENERATION HD1, which recently increased from 660 to 801 participants worldwide. Wave is currently testing two drugs. The trials are known as PRECISION-HD1 and HD2.

Even though both of the pharmaceutical companies are exploring the use of ASOs, there are some differences between them. While Roche is lowering the overall level of huntingtin, Wave is distinguishing between “healthy” and “sick” huntingtin. In other words, Wave are only targeting the mutant huntingtin while leaving the healthy protein alone.

During the third talk, uniQure gave an introduction to their gene therapy trial – the first of its kind in Huntington’s Disease. The company are testing a virus which will “turn cells into a factory that makes a weapon to lower the harmful huntingtin protein” (HDBuzz.net). Read more about the approach at HDBuzz.

The last pharma company out was Novartis. The company could announce to the conference attendees that they are currently in the process of developing a clinical trial to study a huntingtin lowering drug.

The conference in Bucharest was characterized by high quality sessions, but perhaps most of all amazing people.

In between sessions, people joined HD on the Move, HD in the Pool, took part in a soccer tournament and together with Orphan People Russia, EHA organized a photo exhibition. The pictures were displayed in the Plenary Hall where they could be seen in-between and during sessions.

To sum up the conference, Ramona Moldovan could tell EHA: – The people I’ve spoken to really like the human aspect of the conference. They appreciate the sessions but what they really take with them is the human contact. That’s what keeps everyone going.

At the end of the conference 220 people stood side by side as they were singing Olivia Sawano’s song North Star – HD 8890: