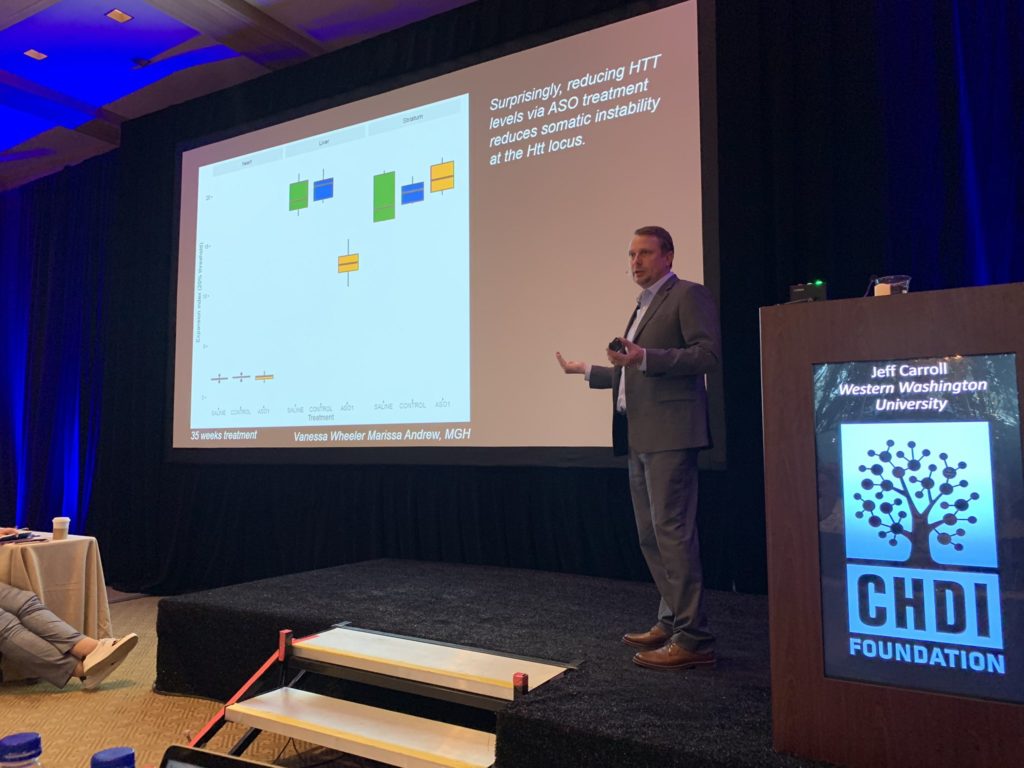 The 15th Annual Huntington’s Disease (HD) Therapeutics Conference is currently taking place in Palm Springs. Here is a summary of the first day, put together by tweets from HDBuzz.

The first session at the 15th annual HD Therapeutics Conference was “Genotype and Phenotype”, where the speakers focused on how the HD mutation (Genotype) changes HD symptoms (Phenotype).

Dr. Seth Ament informed us of his labs work, where they are working on trying to map the first changes that happen in brain cells of mice carrying the HD mutation. The cells in our body – including our brains – have DNA that encodes more than 20,000 genes. Which genes are turned in a given cell determines how that cell works? Ament’s lab has been studying this shift in what genes are expressed and strives to understand the specific factors that make HD cells expresses different sets of genes, in hopes that it might be fixable.

In fact, the HTT protein sticks to different parts of the genome in HD mice compared to regular mice. This suggests HTT may be doing at DNA that is important for understanding HD. In mutant HD mice, HTT sticks to DNA in places where there’s lots of action – genes being read out and used. This suggests that mutant HTT might be doing something unique in areas where genes are being actively used.

Ament’s team finds a very surprising relationship – they can predict how active or inactive a given region of DNA is by how well the HTT protein sticks to it. Ament described his labs efforts in mapping which genes are changed in HD brains. Amazing new technologies allow researchers to map genes in individual cells. Ament’s lab works with these techniques in NIH’s. Ament’s lab used these new techniques to examine changes in more than 13,000 individual cells from HD mouse brains, allowing Ament to literally count how many brain cells of each type are present in the brains of old HD mice. This reveals certain cells that start to be lost in older HD mice.

There are a number of different types of cells in the brain, and Ament’s approach allows him to map changes in each of those cell types separately. That gives a much clearer picture than does mushing them up and analyzing together. These results paint the way to a much more refined understanding of what exactly is happening in each type of cell – which might help us understand how to treat each cell type individually.

Hemali Phatnani of the New York Genome Center, who describes her work understanding changes in the brain and spinal cord of patients with ALS (Lou Gehrig’s disease), or another related disease called FTD. Phatnani works with a large team of ALS clinics to get access to rare samples donated by ALS patients. These are analyzed and the data made available immediately to researchers around the world, which is a great model of open science.

them to study cell-specific changes in cells from ALS patient brains. These data are open for any researcher (or curious non-researcher) to explore at https://als-st.nygenome.org.

Suman Jayadev from the University of Washington Medical Center

Jayadev primarily focuses on Alzheimer’s disease (AD), but because AD and HD share many similar disease symptoms, the HD field can learn a lot from AD research. Jayadev is working together with Sage Bionetworks on this project who are experts in open science and open data in biomedical research, with the aim of speeding up discovery.

Jayadev is interested in studying a particular type of brain cell called microglia. Microglia play a role in the progression of HD and getting rid of microglia in HD mouse models can help with HD symptoms. Scientists have known for a while that HD causes an inflammatory response, and Jayadev is interested in understanding how brain cells other that neurons are playing a role in this inflammation.

Genes involved in inflammation are risk factors for AD. Jayadev is interested in which cells in the brain these genes are switched on to identify risk for disease using a cool technique which provides data at the level of single cells. Examining these changes in single cells has allowed researchers to identify subtypes of microglia. Looking at these subtypes identified one particular type of microglia only present in AD.

With all the data generated, they can monitor progression of AD by looking at which genes are switched on when and where. This can help define different populations of patients which helps clinicians and researchers understand how the disease process works. If we can apply this to HD, perhaps in the future if we know the age and CAG length of a patient, doctors could make informed decisions about how best to treat that specific patient.

William Yang is a researcher from UCLA who studies HD. The Yang lab generates lots of really large datasets from different HD mouse models, looking at how different genes are switched on, which proteins are present in different cell types, and bring this data all together to compare HD. In these big data sets, scientists can search for patterns and correlations which might indicate how some genes work together in HD mouse models. These patterns can be mapped using computational methods to understand how certain cell types in the brain contribute to changes in gene expression they observe.

In his talk, Yang focused on the analysis that was done using control mice without HD, but with this, his team showed that this technique identifies important functions and which cell types contribute to these functions. When the data from the HD mice is overlaid on the map, they find that genes that regulate sleep/wake cycles and DNA repair are changed – confirming findings researchers have reported before. This map can also be used to test lots of new theories researchers have about HD – making it a very welcome tool in the quest to cure HD!

Darren Monckton from the University of Glasgow, is interested in studying how somatic instability can drive Huntington’s and how targeting instability could be a good strategy for making new drugs for HD. This happens, for example, in the HD gene – where a long “C-A-G” repeat grows longer in some cell types. The variation in the CAG-repeat length gets larger as patients get older suggesting there is more instability.

Similarly, the longer the CAG repeat, the greater the variability and therefore the more inferred instability. Worth noting that this doesn’t mean that your CAG number gets longer overall as you get older, this will stay the same. It just means that in a few cells, the CAG repeat length can sometimes increase. The next interesting question becomes, what is driving these changes that cause somatic instability? Evidence is now pointing to DNA repair, a recent hot topic in HD research.

Identifying specific “drivers” (or genes) of this instability could have therapeutic implications for HD. Researchers are now working to figure out which of these drivers are most important in patients, as well as working out which are suitable for targeting with a new therapy or medicine. Now the researchers are looking to see how the instability or changes in CAG-length, varies for a specific patient over time, all thanks to those patients who contributed samples and data to EnrollHD.

Karen Usdin from the NIH has been looking at somatic instability in mouse models of a different disease which affects the nervous system called fragile X. Like HD, Fragile X is a repeat expansion disease, but instead of CAG-expansion, this disease has a CGG-expansion. We can learn a lot from other expansion diseases as scientists believe that there are lots of similarities in the drivers of the diseases

Also, like HD, the CGG repeat that causes Fragile X is affected by somatic instability and genes involved in DNA repair influence this process. Usdin is finding, at least in Fragile X mice, that altering levels of DNA repair genes prevents the expansion of the CGG repeat and even removes some of the repeats! Its very interesting to hear from scientists at this conference from outside of the field of HD, who share lots of interesting ideas and knowledge which might help push HD research forward faster.

The best part about programs that seek to identify small molecules is that they could be taken as a pill if they were shown to be effective as treatments for HD. While the prospect of small molecule treatments is very exciting, researchers have to be extra cautious that the small molecules they want to use aren’t having unexpected effects. Making small molecules which might be medicines for HD is an exciting project but we are still far from learning whether this will be successful. A big team of scientists lead by CHDI are working hard towards this and we’re excited to follow their progress moving forward.

Brian Bettencourtworksfor Triplet Therapeutics, one of the many companies working in this area, who will be telling us more about therapeutically targeting somatic instability.

One of their goals is to stop somatic instability of the CAG expansion and delay the onset of HD, hopefully to an age that’s so old it’s not a realistic lifespan!

This has been such a promising area of research that scientists have to prioritize which molecules to work on first. This allows them to efficiently work toward their goal of developing promising therapeutics for HD as fast as possible. After prioritizing candidates for safety and low risk, Bettencourt’s group developed molecules that target 8 different genes. While this is a large number of targets, it’s a small enough number to get done relatively quickly.

Bettencourt is testing the different target genes in both human cells and mouse models of HD. This means they can look at the effects of these genes on somatic expansion in different organs and cell types to get a complete picture of how this strategy might work. This research is part of a larger collaboration, as Bettencourt is working with HDBuzz’s

One of the things Carroll is interested in is understanding the effect of lowering HTT on non-brain tissue, such as the liver. Interestingly, lowering HTT reduces somatic instability specifically in some tissues, but not others. The Carroll lab wanted to understand these findings in more detail so are collaborating with Sarah Tabrizi to look in human neuron cells.

HTT lowering in a different mouse model that doesn’t have HD (but has ataxia, a different CAG repeat disease) shows that somatic instability is also reduced there, perhaps suggesting that the HTT protein in general has a role in somatic instability. If HTT is playing a role in genome stability, and how well our DNA is maintained, the Carroll lab is keen to work out how that might be happening and how this would affect HD patients. This is a very new observation, and we for one, are excited to learn more about Carroll´s work in the future! 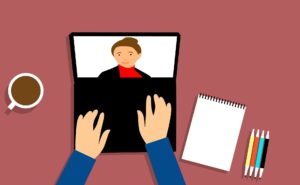 We understand that the COVID-19 pandemic can cause a lot of strain, stress and isolation on Huntington’s disease (HD) families, patients and relatives. In order to support you in this situation, the European Huntington Association in…
Read more
View Calendar