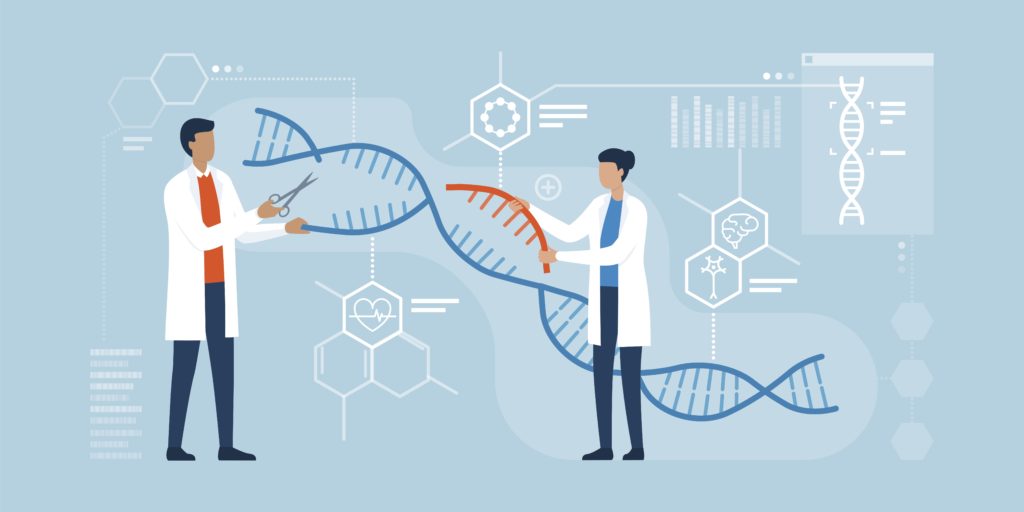 DNA damage repair has become a hot topic in Huntington’s research. By targeting proteins involved in the repair process we might be able to slow down, or even prevent, Huntington’s disease. New research provide important insight on the DNA repair protein MSH3.

In our body, we have a DNA repair protein with a fancy name: MutS Homolog 3 (MSH3). This protein is constantly scanning our genes, looking for errors and mistakes and trying to fix them.

Huntington’s disease is caused by a mistake, or mutation, in the huntingtin gene. Instead of having a normal number of CAG repeats on this gene (less than 27 repeats), people with Huntington’s usually have more than 36 repeats.

In general, we tend to say that the higher number of repeats, the more “aggressive” disease progression.

When undergoing a genetic test for Huntington’s disease, a blood sample is used to analyse the specific number of CAG repeats in the huntingtin gene.

However, we now know that a person who had a blood test showing 44 CAG repeats in their 30s, might have some cells in the brain with 60, 100, or even 1000 CAG repeats at the time of their death.

This increase in CAG repeats could play an important part in why Huntington’s disease affects people more as they get older.

The process of gaining more CAG repeats on the huntingtin gene is known as ‘DNA repeat expansion,’ or somatic instability. Why is this happening?

In a recently published HDBuzz article, Emma Bunting at University College London, states: – When MSH3 comes across this CAG repeat in our DNA, it recognises it as an error and tries to fix it, but instead introduces even more repeats – making matters even worse!

In other words, when trying to correct the genetic mistake in the huntingtin gene, the repair protein is doing the opposite.

Learn more: Uncovering the dark side of DNA repair to design HD treatments

Getting Rid of MSH3

By switching off MSH3 we can perhaps prevent the CAG repeat expansion from happening in the first place. In turn, this might slow down the progression of Huntington’s disease.

Moreover, Bunting states that: – What’s really exciting about MSH3 is that, unlike other DNA repair proteins that are known to be involved in the repeat expansion process, completely getting rid of MSH3 does not seem to have many negative side effects.

To learn more about the MSH3 protein and how it is controlled within our cells, researchers at the National University of Ireland tested a drug in human cells.

In the autumn of 2020, they published the results of the study, showing that the drug did halt CAG repeat expansion. This information might be crucial in helping design Huntington’s disease drugs in the future.

Triplet Therapeutics is currently in the process of targeting somatic instability. The company recently completed the enrollment of participants in their observational (non-drug) study called SHIELD-HD.

Here, information (cognitive, motor, and functional data) will be collected laying a foundation for future trials.

Most likely, Triplet will go ahead with in-human drug trials in late 2021 or early 2022.