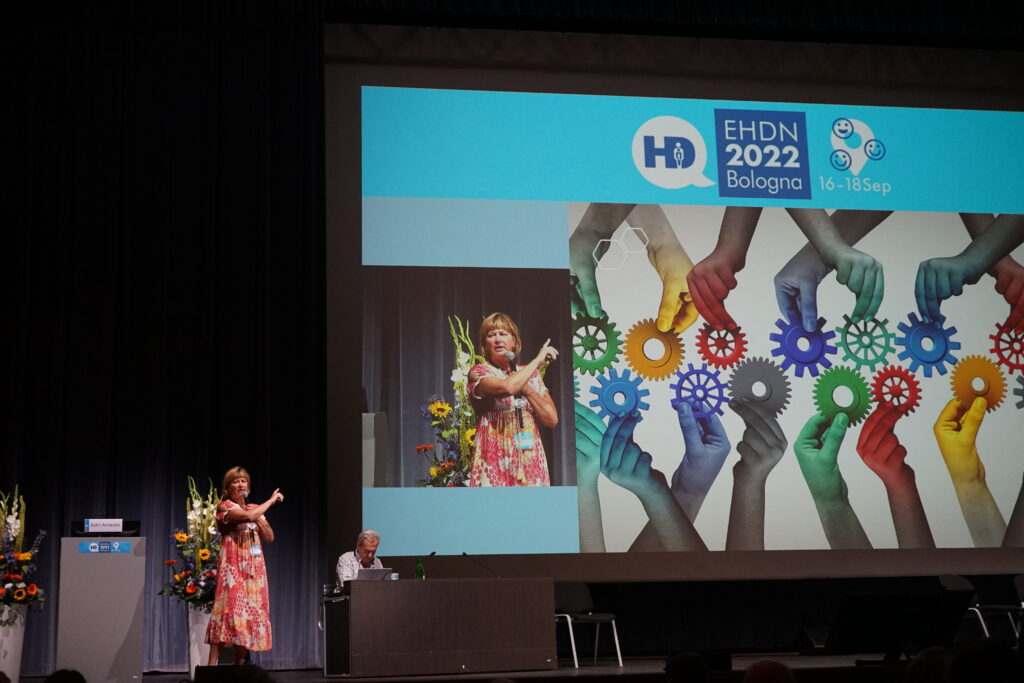 This year the EHDN 2022 Plenary Meeting was in Bologna, and we had the opportunity to go in person and learn about the latest updates on the current clinical trials.

Earlier in the year we were all hit by the suspended dosing in the VIBRANT- HD trial of Novartis. However, this year’s  conference has demonstrated again that the hard work continues and there is some exciting progress that was presented in some of plenary sessions at the conference. Here is a small list:

During the EHDN conference in Bologna Roche announced that they will start a new Phase 2 trial with Tominersen.  As most of you remember the trial Generation HD 1 stopped giving participants the medicine because some of them got worse.  Since March 2021, Roche has done a very thorough analysis of the results from Generation HD1 and the conclusion is that a sub group of participants potentially benefited from the treatment.  This time it will be a Phase 2 trial, which means a smaller number of participants and two different doses of the medicine will be tested.

Generation HD2 is still being prepared, but Roche hopes to be ready to start early next year.  360 participants in 15 different countries will be enrolled. One group will get a low dose, one a higher dose and a third group will get placebo.  The treatment will be given through a lumbar puncture, as in the previous trial, every 4 months.  This trial will explore how  he lower doses of Tominersen (compared to the Generation HD 1 trial) works in  relatively younger and early stages HD patients.  The trial has a 16-month duration and all participants will be offered to get the medicine in a so-called Open Label Extension after the 16 months.

In August 2022, BrainVectis, a subsidiary of AskBio,  gained approval from the French National Agency for Safety of Medicines and Health Products (ANSM) to conduct a phase 1/2 trial with a drug called BV-101. The trial will look at the safety and efficacy(ability to produce a desired result) of BV-101 in adult patients with early-stage Huntington’s Disease.

BV-101 will be given(one time) through MRI-guided neurosurgical techniques directed to target tissues in the basal structures of the brain. In preclinical studies in mice, BV-101 showed the ability to repair the essential cholesterol pathway(which is damaged in HD patients), provide neuroprotection, and restore neuronal function by delivering  a crucial enzyme in the brain which is lowered in people with Huntington’s Disease.

The trial will be in 2 parts with approximately 12-18 participants. One part is to find the correct dose and 2nd part, expansion of the trial. The exact number of participants will depend on the safety of part 1.This trial is called an open label, meaning there is no placebo group. The participants will be rigorously monitored for 52 weeks and follow up of 4 years and is expected to take place in two sites in France.

SOM Biotech is developing SOM3355 (bevantolol hydrochloride) for the treatment of chorea in Huntington’s disease. The route of action is similar to tetrabenazine  or deutetrabenazine (Austedo) but with less side effects.

SOM3355 has been used as a treatment for hypertension for over 35 years.

This is a phase 2b trial looking at the safety and  the efficacy and of two doses  of SOM3355 in 129 participants in early stage of HD. One lower dose, one higher dose and a placebo group. The drug will be given orally in a capsule twice a day and the trial will last 12 weeks.  The trial will be conducted in 22 European sites.

Sage Therapeutics has developed SAGE-718 for the treatment of cognitive decline in patients with neurodegenaratives diseases and now with Huntington’s disease (HD). Sage hopes that cognitive decline in HD could be slowed with SAGE-718 treatment, with a long-term goal of helping patients maintain or even regain functional capacity.

A trial has already been conducted on Parkinson’s disease participants and also in HD with a longer dose regime.

This new HD phase 2 trial is a shorter duration, 28 days with follow up to 70 days. There is only one dose of the drug and the placebo group. The drug will be given orally in a capsule once a day.  40 early manifest HD participants will be enrolled  along with 40 matched healthy participants who will only do the assessment part of the trial.

Annexon conducted a phase 2a trial which ended earlier this year. The trial was only conducted in the United States. 28 adults diagnosed with, or at risk for, early manifest HD. Participants were evaluated over 9 months– 6 months of treatment with ANX005 and 3 months off treatment. The treatment was given by intravenous(IV).

ANX005 is an investigational  antibody designed to stop one part of the immune system , the complement pathway(CP). Evidence suggests that the CP plays an important role in undesirable harm and removing functioning nerve connections in the brain, that leads to neurodegeneration in HD.

ANX005 fully blocked the  complement pathway in both the blood and brain as measured by cerebral spinal fluid for the entire 6 month treatment period and well into the 3 month follow-up period. In addition, over half of the participants treated with ANX005 showed encouraging stabilization of their disease, and in some instants even improvement, on clinical measures.

The results support the continued development of ANX005 to treat HD.

– Article made by Dina de Sousa and Astri Arnesen