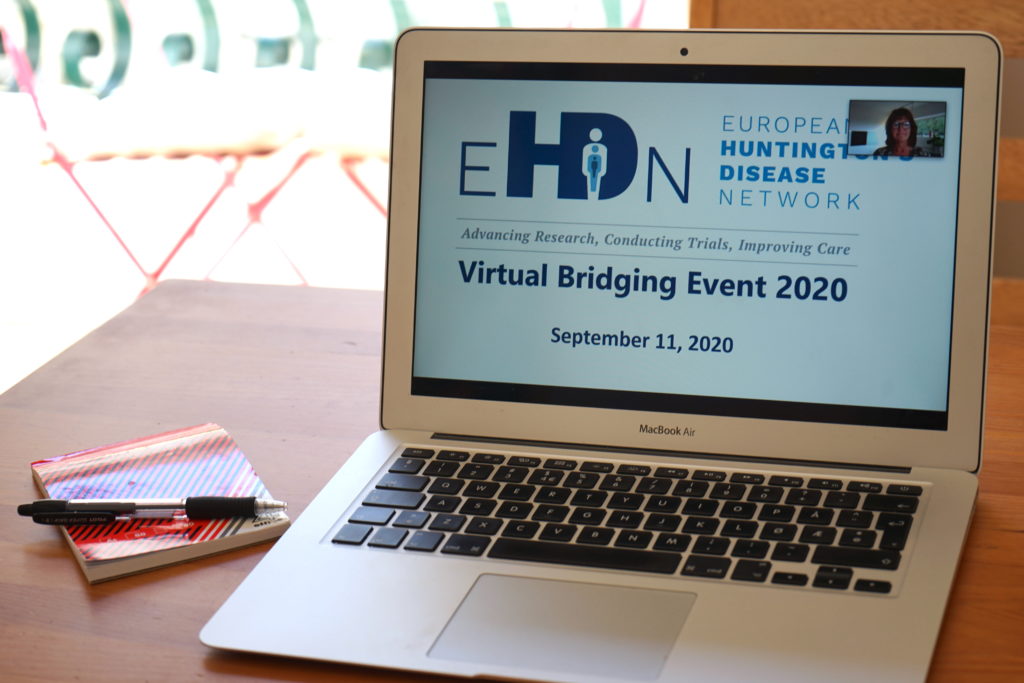 At the moment, there is a lot of research being done in the Huntington’s disease field. As Sarah Tabrizi from University College London stated during the meeting: ­– It’s a really rich time for us to be involved in Huntington’s disease. Get an update on some of the trials and studies here!

Find all the recorded sessions here!

The EHDN Plenary Meeting was originally going to take place this weekend in Bologna, Italy. However, due to the coronavirus, the European Huntington’s Disease Network (EHDN) decided to set up a mini version of the meeting online.

More than 1000 people from 52 countries had signed up for the Virtual Bridging Event. The attendees were welcomed by Anne Rosser and Patrick Weydt at EHDN together with Astri Arnesen from the European Huntington Association:

– So far, I see at least two good outcomes of the pandemic, Astri stated.

– First of all, politicians have fully understood that keeping people as safe and well as possible has to be on the top of their priority list. Secondly, academia and pharma has demonstrated a unique willingness to work together – share data and collaborate. Because this is the only way to achieve development of medicines – fast.

While the coronavirus has made it challenging to keep Huntington trials running, many of them are still ongoing – and the results look promising.

In the first session, Frédéric Saudou, Director of the Grenoble Institute of Neurosciences, gave an introduction to the new discoveries related to the huntingtin protein function.

The huntingtin protein is thought to play a crucial role in the progression of Huntington’s disease (HD). However, for a long time, the exact function of this protein has not been known. Increasing our understanding of huntingtin has therefore been considered an important aspect.

Frédéric could tell the attendees that novel data shows that huntingtin regulates key cellular functions. This regulation is being done through interactions.

Huntingtin is a large protein and interacts with approximately 400 other proteins. These interactions – especially the one to Dynactin – seems to be essential in cellular functioning.

In addition, expansion of the huntingtin gene and its role in the onset of Huntington’s disease was explained by Darren Monckton at the University of Glasgow.

If you have inherited HD, your ‘sick’ huntingtin gene will have CAG segments repeated more than 36 times. In a person without the disease, the number of repeats will lay somewhere between 10 to 26.

A person with Huntington’s can for instance have 41, another 48. In general, the more repeats, the earlier onset of Huntington’s disease. But now researchers have discovered that this number is not fixed.

Over a person’s lifetime, the gene can gain even more CAG repeats in certain cells of the brain and body. A person whose blood test showed 41 repeats as a young adult, may at the time of their death have some cells in the brain with 80 or even 1000 CAG repeats.

This change in the huntingtin gene is called somatic instability.

According to new data, degree of instability differs a lot from person to person. We can therefore talk about ‘slower expanders’ and ‘faster expanders’. The specific pace of expansion is correlated with age at onset of disease.

To learn more about how to target expansion in the huntingtin gene, Anne Rosser could tell the attendees that SHIELD-HD is in the process of taking a closer look at how Huntington’s disease progress.

In total, 66 people affected by HD will participate in the study over a 2-year period. In the end, the researchers hope to have a clearer picture of how somatic instability changes.

Despite the coronavirus, SHIELD-HD is well underway. In May, the first patients were enrolled in Toronto, Canada.

There are many avenues for treating Huntington’s disease. One of the major ones is huntingtin lowering:

By reducing the level of huntingtin protein in a person with Huntington’s, we might be able to slow disease progression or even stop the disease from developing.

At the moment, multiple pharmaceutical companies are working on huntingtin lowering treatments – and there seems to be a number of ways of reaching that goal.

One way is oral huntingtin lowering therapy. In other words, a pill taken through the mouth. George McAllister from CHDI told the attendees that both PTC Therapeutics and Novartis are working in this field.

PTC will soon go ahead with clinical trials – studies with human beings, Novartis have already started.

There are many advantages with oral therapy. First of all, it doesn’t require special facilities. Secondly, it is rapidly reversable: if necessary huntingtin levels will return to baseline when treatment is stopped.

However, there are some potential disadvantages: oral huntingtin lowering is not specific, meaning that the whole body is being treated. In addition, the effects found in rodents (such as mice) might be different than in humans.

Other promising and ongoing huntingtin lowering trials are currently being carried out by Uniqure, Wave and Roche – each of them with their unique approach.

Earlier this year, the first two patients were successfully treated with Uniqure’s gene therapy drug. The drug is called AMT-130 and use a harmless virus filled with helpful instructions.

AMT-130 is delivered directly into the brain by an injection. Data from multiple animal studies show that both the procedure itself and the drug is safe.

In total, the pharmaceutical company hope to recruit 26 participants. These will be separated in three groups: low-dose AMT-130, high-dose AMT-130, and one group receiving imitation surgery. Participants in the imitation group – which does not receive any drug – will be offered the active drug after a while.

During the meeting, Sarah Tabrizi from the University College London gave an update on the ongoing GENERATION HD1. The study is fully recruited with more than 790 participants.

Here, the effects of the Tominersen drug, previously known as RG6042, is being tested. The drug has proven to be safe, well-tolerated and to reduce mutant huntingtin by roughly 40 to 60 % in people with HD.

The drug is delivered through lumbar puncture – known as a spinal tap – every second month.

GENERATION HD1 is a robust study with a large sample size and geographical diversity. Despite the coronavirus, results are therefore still expected in 2022. Hopefully, the data will indicate whether the drug is efficient in slowing disease progression or not.

In contrast to the already mentioned studies, Wave is developing an allele selective approach, targeting only the mutant (or sick) huntingtin protein.

A person with Huntington’s disease will have both sick and healthy huntingtin. These two make up the total level of huntingtin.

Instead of lowering the total level, Wave is only lowering the sick huntingtin. This might be important as the healthy huntingtin protein is thought to play a crucial role in normal nerve functioning.

This selective approach is carried out by targeting specific SNP’s in the gene. Data from a study carried out by Wave, indicated that well over half of people with Huntington’s disease have the SNP’s needed to carry out the selective treatment.

Wave’s PRESCISION HD trials are currently ongoing and data is expected in the first quarter of 2021.

In addition to huntingtin lowering, there are other approaches being tested – and some of them have been in the field for a long time.

Pridopidine has been studied for many years. In the beginning it was thought to influence dopamine. However, this was discovered to be incorrect.

G. Bernhard Landwehrmeyer at the Ulm University Hospital gave an introduction to the PROOF-HD study sponsored by Prilena. The study is investigating Pridopidine. Preliminary results indicate that the drug candidate is a highly selective Sigma-1 Receptor (S1R) agonist. This might be important in maintaining neuronal function.

A Phase III study will start in 2020. Here, participants will test the drugs safety and tolerability.

Lastly, Anne-Catherine Bachoud-Levi of Hôpital Henri Mondor, gave an introduction to the MIG-HD trial which has been ongoing since early 2000.

Over the last two decades, cell transplantation has been investigated in 45 people with Huntington’s disease. However, the study was delayed due to alloimmunisation – an immune response to foreign antigens after exposure to genetically different cells or tissues.

The response led to a lack of replication in improved motor symptoms before and after cell transplantation.

Researchers are currently preparing for a new trial, but it requires that alloimmunisation has to be mastered. Moreover, assessment of symptoms have to be improved.

– We have a blind spot in our community

The length of this article demonstrates how much that is currently being studied in the field of Huntington’s disease research.

As Sarah Tabrizi stated during the meeting: ­– It’s a really rich time for us to be involved in Huntington’s disease.

However, in the last session, Hugh Rickards at the University of Birmingham, draw attention to a highly important topic: access to effective drugs.

– We have a blind spot in our community, Hugh stated.

Hugh underlined that drug development is only one part of the process. Another, as important one, is ensuring access – and this is often overlooked.

After attending EHDN’s last meeting in Vienna, Hugh founded the HEATED project: Huntington’s Equal Access To Effective Drugs. The project is about ensuring equal access to drugs by identifying barriers and overcoming them.

In his presentation, Hugh quoted Nancy Wexler who discovered the location of the Huntington’s disease gene through samples she had collected from people in Venezuela:

– The ultimate challenge will be to bring safe, effective and affordable treatment not only to patients in North America and Europe but also to patients with Huntington’s disease throughout the world. For those in Venezuela who donated the samples that made this promising approach possible, the treatment should be free.

If you want to learn more about the project, or get involved, you can contact Hugh here.

Find all the recorded sessions here!